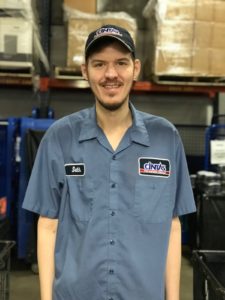 Seth is a talented and capable young man. He’s smart and funny, trustworthy and honest and he’s a very hard worker. When Bios began supporting him, he was not actively involved in most of the decisions that affected his life. He was a kind and gentle, “go with the flow” kind of guy. This made Seth super likeable and really easy to get along with, but it limited his influence over his own life.

In 2013, Seth began working at Cintas, a nationwide corporate uniform and supply company. BiosWork supports Cintas in its Tulsa operation with business solutions, providing great quality employees for their high turnover positions. This helps them stabilize their work crew and maximize their production.

At Cintas, Seth’s job is on a high-production team where he is a top performer. Scott Garlich, a supervisor at Cintas, loves having Seth work at Cintas and Ronnie Mananu, Seth’s Bios Employment Specialist, says, “Seth is dependable and calm, cool and collected” when it comes to hitting work goals. Not only is he a top performer, but Seth is also a valued coworker. He provides encouragement, support and inspiration to the people he works with. He says work is easy when you learn how to do it well, and everyone agrees that doing work well is absolutely something that Seth does.

Seth points out that work is much more than just making money and doing the tasks of his job. He says it’s important that he work with his friends. Seth says his relationships with his coworkers have given him the confidence and communication skills to use his voice to advocate for himself more.

One aspect of work that Seth appreciates is making money. Making good money and managing it wisely have given him agency in his life and influence over his world that also increase his confidence in advocating for himself. It’s also important to like what he does. Seth enjoys being valued for his hard work with praise, having clear, well-communicated expectations and being rewarded for good performance. Seth calls Cintas “a great place to be.”

With the money he makes at work, Seth gets to do the things he enjoys. He takes pride in looking nice, like when he dresses up for a night on the town. Those work checks also help pay for Seth to go to the movies. He especially loves sci-fi films. A bit of an introvert, Seth values his “me-time” at home, seeing his home as a haven. Long term, Seth has a dream of living on his own with minimal paid supports. He recognizes the importance of having a good career in accomplishing this. Based on his progress so far, we are certain he can accomplish those goals.

The work success Seth has had, the work relationships he has developed and the work money he makes and manages have all positively impacted Seth’s view of himself and his role in managing his life. He’s still the kind and gentle Seth we’ve always known, but now kind and gentle Seth also takes charge of his own life.

Some features of this site may not be available with your current browser.
In order to receieve the best experience, please update to a newer browser.